The Music Project at St. Agnes’ Primary began in 2006 when Sr. Bernadette Sweeney, (former School Principal at St. Agnes’ Primary) and Dr. Joanna Crooks (former Director of the National Youth Orchestra) came upon the idea of making it possible for the children of St. Agnes’ and Scoil Colm Primary Schools to gain access to the world of classical music via the violin.

To this end, they found funding to purchase 30 violins and so began the origins, of what is now known as, the St. Agnes’ & Scoil Colm School Orchestra. The project began with each class being given a weekly violin lesson based on the Suzuki method of violin teaching which was initially taken on by Joanna herself and volunteer music teachers. Ten years later, the project has grown and as well as each child in the school receiving violin/viola lessons on a weekly basis, a whole school orchestra; a junior orchestra and a community orchestra have all been founded under the guidance of Joanna and her team of volunteers. St. Agnes’ Primary are very grateful to Joanna for all her hard work and for her pioneering work in ensuring that every child in our school is given access to the wonderful world of classical music. For further information on the music project please follow the link to their website below.


Music in the area - CCMA

Located close to the school the St Agnes CCMA provides low cost music lessons to children. This is a separate entity to our school and more information can be found here:  http://www.stagnesccma.ie/

Nineteen past pupils of Scoil Una Naofa and one pupil from 6th Class who form St Agnes Chamber Orchestra pictured with members of St Agnes Parents String Orchestra at the residence of the Irish Ambassador to Spain, Sile Maguire, on Sunday 24th June 2018. 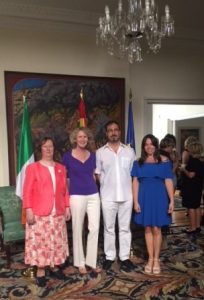 ​The 2018 Richardson-Smith Cup was presented jointly this year to Kiva Byrne, violin, and Rebecca Ross, cello, at the pre-tour concert on Tuesday 19th June 2018 in St Agnes Community Centre for Music & the Arts. The Cup is presented annually by Gillian Smith, in memory of Dr Olive Smith, founder of the National Youth Orchestra of Ireland. It is presented to a student who has worked exceptionally hard and has made an outstanding contribution to SCOIL UNA NAOFA VIOLIN & ORCHESTRA PROJECT. Both 2018 winners will start their Leaving Cert year in September 2018. They are pictured here outside St Agnes CCMA with previous winners, Ellen Donohoe, viola, 2017 winner, and Kelsie Jones, violin, 2015 winner. All four girls will leave on Friday 22nd June with St Agnes Tour Orchestra for a short tour in Madrid. Due to the illness of Gillian Smith this week, the cup was presented by her husband, Lindsay Armstrong. Also in the audience last night was the mother of the Irish Ambassador to Spain, who will welcome the Orchestra to the Ambassador's residence in Madrid next Sunday, June 24th. 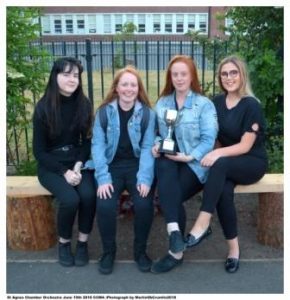 Just heard that SCOIL UNA NAOFA ORCHESTRA with choir and ST AGNES' CHAMBER ORCHESTRA (secondary) have been invited to play at the National Concert Hall on Saturday 9th February 2019 at the 24th Festival of Youth Orchestras run by IAYO, the Irish Association of Youth Orchestras! How exciting is that!

On Wednesday, 7th March, our School Orchestra travelled to The National Basketball Arena to perform in Cór Fhéile na Scoileanna. Cór Fhéile na Scoileanna is a festival of choirs and music bands from Primary Schools all over Dublin, and for a week in March, hosts about 10 schools every morning and evening. The schools on Armagh Road have a long history of performing at the Cór Fhéile. On Wednesday morning, we opened the concert with 3 wonderful pieces of music. Bhí Moltóir Cheoil ann, agus bhí sí an-tóghta leis an gceol. Her report was high in praise of our wonderful musicians, teachers and conductors. We are very proud of them all.

Here are some photographs of the event, courtesy of Joanna Crooks. 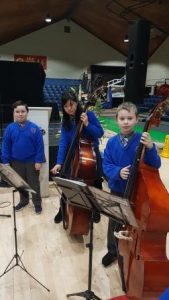 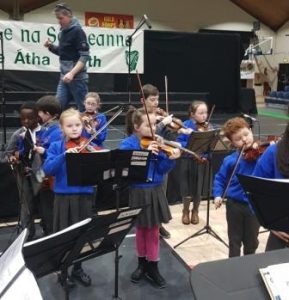 The school is a busy place this term. Activities such as violin lessons have resumed in the CCMA each week. The after-school clubs are also up and running. There is great variety:- Irish dancing, Book Club, Active Club, Music club, Homework club, Coding club, Lego club, Whizz Kids & knitting club, so many interests are catered for.

Our 6th classes will be receiving their Confirmation on Thursday 17th Feb in the church. We hope they have a lovely day.

We are continuing to work on our Green School status. The focus is on travel this time, and one of the main things to have happened was the School Zone outside the school. It means that the footpaths outside the school are clear of traffic, and makes them safer for walking, cycling or scooting! The planters with trees & flowers are lovely too. We have also received news that Dublin City Council are going to install a sheltered bicycle rack in the yard during the year.

It’s great to see that the parents are walking together on Wednesday mornings at 9am. Everyone is welcome to join the group.

It was lovely to read about ‘The Crumlin Community Clean Up’ in The Irish Times recently, and to spot some of our pupils & parents in the photo. Find our more about this group here!

Apologies, these are the final arrangements for the Open Violin Lessons this year to be held in the Upstairs Music Room

The International Music Council recently announced that the SCOIL UNA NAOFA VIOLIN & ORCHESTRA PROJECT has been selected as the 2019 LAUREATE of the IMC 2019 MUSIC RIGHTS AWARD. The nomination was made by the European Orchestra Federation, and adjudicated by an international panel of experts on behalf of IMC. The adjudicators wrote, “This project involves everyone, not just the school but the community. Aside from broadening a child’s world, it gives them without a doubt an invaluable tool and bright spot for their future. This project demonstrates the transformational power of music and its impact in society.” Attending to receive the award in Paris on September 28th at the WORLD MUSIC FORUM will be Sister Bernadeette Sweeney, former Principal and founder of the project and current Director of St Agnes Community Centre for Music & the Arts, Carl Jones, aged 16, past pupil, double bass player with the Dublin Youth Symphony Orchestra and the Irish Youth Wind Ensemble and Seamus Doyle, chairman of St Agnes CCMA and conductor of SCOIL UNA NAOFA ORCHESTRA and ST AGNES’ PARENTS STRING ORCHESTRA. This is a huge honour for the school violin and Orchestra Project and we congratulate Joanna Crooks, Sr. Bernadette and all the team for this great accolade and acknowledgement of their hard work and dedication to the Music Project both at school and community level.

The School Orchestra performed in Walkinstown Library after school on Wednesday 15th May. Well done to all performers!

Our three 2nd classes (Ms Denmead, Ms Brennan, Ms Waldron) performed at the National Basketball Arena on Wednesday, 6th March as part of the annual Córfhéile festival. They sang Leonard Cohen’s Halleluah in Irish and “How Far I go” from Moana.

They were fantastic and thanks to all the boys and girls for being so well behaved on the day. They were a credit to the school and to their parents! Thanks to Pauline who played violin and to Peter Mullen who accompanied them on the piano. Ms Waldron, Ms Brennan and Ms Denmead rewarded the choir with a pizza party at school. Well done to all!

Saturday 9th February was a big day for our school orchestra and for Mr Shanahan’s and Ms Coady’s 3rd and 4th classes. They were given the opportunity to sing with the school orchestra and the chamber orchestra of past pupils, live on stage at the National Concert Hall. This was a fabulous event and showcased all of the hard work that Joanna and her team put in to making music accessible to all of the school community. We give huge thanks and appreciation to our Music tutors, conductors and volunteers. (Joanna, Pauline, Seamus, Nicole, Shane, Jennifer, Aoife, Joyce, Margaret and Rose) and to all the parents who made sure their children were on time for the bus at 8.30am on Saturday morning and who came to support the children for the performance.

Henry McKean visited from the radio station Newstalk and his piece on the school and music project was broadcast on Friday 8th February on the Ivan Yeats show.

The Music Project has had a very busy and successful February so far. A lovely article was written about the school by Róisín Ingles in the Irish Times on Friday 1st February, entitled, ‘Kids in Foxrock play the violin, not Crumlin’: the school that’s changing lives through music via The Irish Times https://www.irishtimes.com/life-andstyle/people/kids-in-foxrock-play-the-violin-notcrumlin-the-school-that-s-changing-lives-throughmusic-1.3777328

RTE Junior News and Róisín Ingle from the Irish Times, will be here on Tuesday, 14th January at 10am to record the choir and orchestra who will be performing at the National Concert Hall on Saturday, 9th February.

Our senior school Christmas concert took place on Friday, 14th December. All classes 3rd to 6th performed for their parents and families. We saw some great acting skills and singing not to mention some fantastic dance moves from our 6th class boys!